In addition to being a celebrated conductor, he was an MIT alum chemist that had been in business with Roche Pharmaceutical.

From his years working with his medical colleagues in his business, he was inspired to work to find a successful treatment for his and other’s progressive memory loss.

Dr. Josefowitz was an award winning classical music producer and is credited as the historical inventor developer of the modern vinyl LP record. Scientific applications were his forte.

Playing violin since he was a child, he mentored many young musicians in his LSCO London Soloists Chamber Orchestra, and launched their careers worldwide, affording them the debut break they needed as soloists.

Conducting well into his 80’s, he overcame physical limitations as he was challenged with two hip replacements.

After the operations, he developed Alzheimer’s while continuing to actively conduct. In London, many friends of Dr. Josefowitz were inspired by his conducting his beloved LSCO young orchestra players, while working personally against the day to day issues with the condition.

CMHNR Director Mr. Shapray was musically mentored for many years by his relative Dr. Josefowitz in the maestro’s home, on family trips together, and at the conservatory with international violinist and friend Sergiu Swartz.

Together Mr. Shapray by Dr. Josefowitz’s side, both worked to network with colleagues, comb the scientific literature, and review protocols for cases that had achieved some success with MCI Mild Cognitive Impairment, the early form of progressive Alzheimer’s. 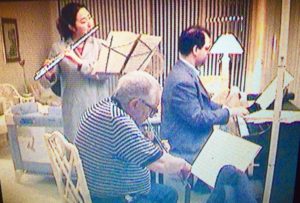 Private home family concert with Dr. Josefowitz playing violin in trio with flute and piano with orchestra friends from London

The application of a complex “multi-point systems approach” was the goal.

UCLA is one of the leaders in the systems approach that has recently proven to reverse Alzheimer’s in many but the most advanced cases.

Because of the scale of application presently required to prove success in this condition, the condition progressed and he gradually lost the ability to speak or play violin or conduct orchestra.

A symphony requires many instruments and people to bring the music to life; and a complex neurological condition also presently requires much more than a single “wonder medicine” to improve the outcome.

His struggle with Alzheimer’s was bravely waged in the search for a complex enough coordinated treatment that could improve and reverse the condition.

There are new insights emerging.

Recently the work of Beth Stevens of Boston Children’s Hospital, in microglial brain immune cell over-activation in Alzheimer’s, has compelling evidence that the dysfunctional immune system also has a key role, in addition to the other factors being addressed.

There is a tremendous need to educate the professional medical community in how to apply this established new multi-faceted thinking about this condition.

We support further research into the refinement and application of a “multi-point systems approach” in treating MCI/Alzheimer’s.

A California dentist, related his tragic heartache and enormous disappointment in having invested over 600,000 dollars in his mother’s Alzheimer’s care when there seemed to be nothing from the “top” experts that could stop her decline.

Her ability to function, including caring for her teeth got worse, and he complained that the medical staff turnover was so frequent, because they were so low paid, that it created a very poor oral hygiene environment for his mother, even though he twice a week visited, and instructed the newly hired staff how to clean his mother’s teeth; not to mention how he felt that he spent such large sums for her care.

What this kind and very busy dentist does not know, is that broad spectrum antibiotics like Cipro, which are regularly given at expensive medical facilities, have been reported to devastate people’s teeth, causing them to rapidly decay and weaken bone, with many reports of formerly strong, good teeth even snapping in half.

Broad spectrum antibiotics cause massive changes to the micro-biome good bacteria in the gut and the mouth, that effect assimilation of important minerals that the teeth are made of, as well as the bone maintaining mineral balance.

There is a new study being conducted on the issue.

Less known among many prescribing physicians, is that the broad spectrum antibiotics often cause encephalopathy (see review below in the Journal Neurology), and neurotoxic cognitive changes, that mimic Alzheimer’s.

To treat these cognitive changes as if they are genuine Alzheimer’s is all too common, and leads to further decline because the cause is never actually addressed, and what caused a significant element of changes in the first place is never understood.

“While diarrhoea is a commonly associated adverse effect of many antibiotics, toxic effects on the central nervous system are perhaps much less recognized [1]. A danger for clinicians and patients alike, of not recognizing neurotoxic effects of antibiotics is that the neurological manifestations of toxicity may be confused with a different neurological condition.”

Many prescribers of medicines do not inform their patients that very common medicines like Nonsteroidal Anti-inflammatory Agents
Aspirin, Ibuprofen, Indomethacin, Naproxen can cause cognitive impairment. Also everyday medicines like Antihistamines/Decongestants
Phenylpropanalamine, Diphenhydramine, Clorpheniramine, Brompheniramine, Pseudoephedrine can cause cognitive decline. As well as a host of other medicines listed as such:  http://www.health.am/psy/more/some-medications-that-may-cause-cognitive-impairment/

“The side-effects of prescription drugs tend to be reversible, but continued use of drugs that impair cognitive ability may, in some cases, lead to permanent damage.“

Many people that are prescribed multiple medications, are not warned about possible cognitive side-effects. Because of this dentist’s experience, he believes that the experts he hired, had achieved something like the state-of-the-art, and “must know” what works and what doesn’t work; when in fact, the medical science world is a much larger place, and there are many camps of experts, including specialists that are achieving reversal of Alzheimer’s decline with classic and innovative, non-drug methods.

Drugs are just but one type of approach, and we know from our wider network of scientific resources, that depending on drugs only or even as a main trunk of the treatment tree, has been a prescription for disappointment, especially considering that more than one of the major pharmaceutical giants including Pfizer have now just recently cancelled their funding of research work, as well as numerous cancelled trials, in the search for an Alzheimer’s drug because of one failure after another.

“The drug, verubecestat, is the latest in a long string of medicines to fail to have an effect on the disease. Over the past decade, experimental Alzheimer’s drugs have repeatedly failed to slow the memory-destroying disease. Late last year, an antibody drug infused into patients’ bodies, made by Eli Lilly, didn’t have a significant effect on the disease. A medicine from Pfizer, Johnson & Johnson and Elan Pharmaceuticals, which was similar to the Lilly drug, had also previously also failed.

Given the failures, it’s fair to ask if the basic idea behind all these drugs is wrong. All target a protein called beta amyloid, which builds up in clumps in the brains of Alzheimer’s patients and is thought to be a cause of the disease, an idea scientists call “the amyloid hypothesis.”

Pharmaceutical giant Pfizer has announced it’s intention to stop research and development in areas including Alzheimer’s disease and Parkinson’s disease.

Our mission is to comb the globe for the very best practitioners that are achieving results in difficult cases. Not all people that have cognitive problems, actually have Alzheimer’s. If someone like the dentist, is in a hurry, they are very likely to overlook the true causes, as well as technologies and methods that can reverse their loved one’s condition.

If you want to learn more, please contact us.

Disclaimer: The information presented here is for educational purposes only.